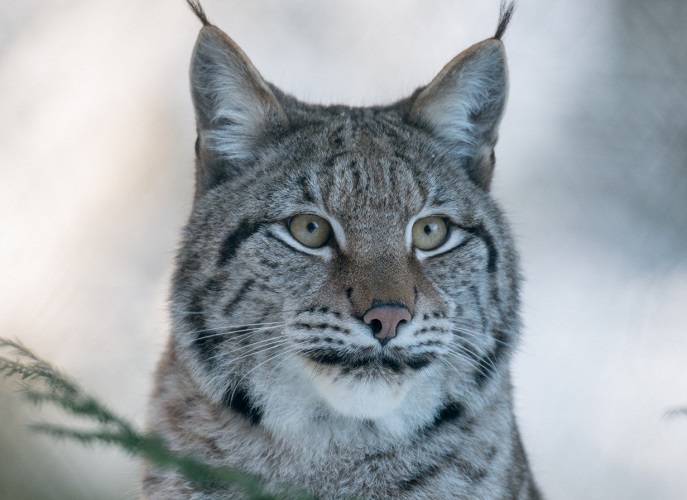 The lynx is the largest and most northern representative of small cats. The number of lynx relative to other wild cats is larger, but their number is rapidly reduced due to the destruction of habitual habitats and the resolution of hunting for them, as the lynx was considered a pest of animal husbandry, which also has valuable fur.

In Siberia, its subspecies is found — Siberian lynx. She lives in dense coniferous and mixed forests, mountain taiga. Lynx (Lynx lynx) is found on the territory of the Maly Abakan section, its visits to the Hol-Bogaz and Subzaplot areas are occasionally noted. The lynx is listed in the Appendix to the Red Book of the Republic of Khakassia. The number on the site of Little Abakan is 2-3 individuals. The lynx is the largest and most northern representative of the small feline.

The color of the soft, long hair of cats in different areas of its habitat has a different color.

Males reach 76–106 cm long, and females 3–6 cm less. The tail is from 10 to 20 cm. The mass of adult animals is most often equal to 16–20 kg. They have long legs, but the trunk is shortened. The tail is chopped off. The head has a small rounded size. As A.A. Cherkasov in “Notes of a Hunter in Eastern Siberia”: “The old lynx is quite large, so it happens with a decent yard dog, but the lynx relative to the dog is long and squat — the elongated skin of the male is up to 1.5 m long and more. In appearance, the lynx is much more similar to a cat than to a dog. Her head is very similar to the cat, the nature — in particular. Movement, tricks, manners, gait, pace is absolutely feline.»

Lynx is adapted to move in deep snow. The color of the soft, long hair of cats in different areas of its habitat has an unequal color: ash-blue, pale-smoky, gray-brown, red-red. Often, fur with dark spots, large on the back and sides, small — on the chest and legs. On the belly, the fur is especially long and soft, but sparse and almost always pure white with sparse specks. This color helps the beast to disguise against the background of mosses and lichens. In different habitats, the color of their skins changes from smooth, spotless to densely spotted. The paws of the animal are large.

The lynx’s signature card is its tasselled ears.

The lynx’s signature card is its tasselled ears. The animal withstands severe frosts up to — 57 C. They feed on lynx ungulates, rodents, birds. They have excellent hearing and are able to find small animals even under a large layer of snow, can hear and see them in complete darkness. Silently moves through the forest, overtaking his favorite prey — the hare. When an animal becomes irritated, its voice becomes growling. When it is full, it publishes a purr, similar to the purr of large domestic cats. Pregnancy lasts 66–78 days. Usually 2-4 babies are born.

Lynx is listed in the International Red Book, as well as in Annex II to the Convention on International Trade. The body weight of newborn kittens is 200–350 g. At the age of 2 months, babies weigh up to 3 kg. The weight of adult animals caught in nature ranges from 17 to 36 kg.

The following reserves take part in the observation and preservation of lynx: “Sayano-Shushensky” (Krasnoyarsk Territory), “Ubsunurskaya Hollow” (Tuva), “Khakassky”, “Pozarym” Reserve (Khakassia). And on the territory of the reserve «Pozarym» and the reserve «Sayano-Shushensky» field expeditions took place.

To implement the plans for the study of cats purchased equipment for monitoring their populations and migration, diet and animal diseases, we need vehicles, as well as funds for the study of interpopulation interactions of mammals. One of the most important goals of the project is to convey to the population living in these regions knowledge of the need and significance of the conservation of rare animal species, as well as the preservation of the unique nature of these places.

Predictor cat or cat horoscope for a day.